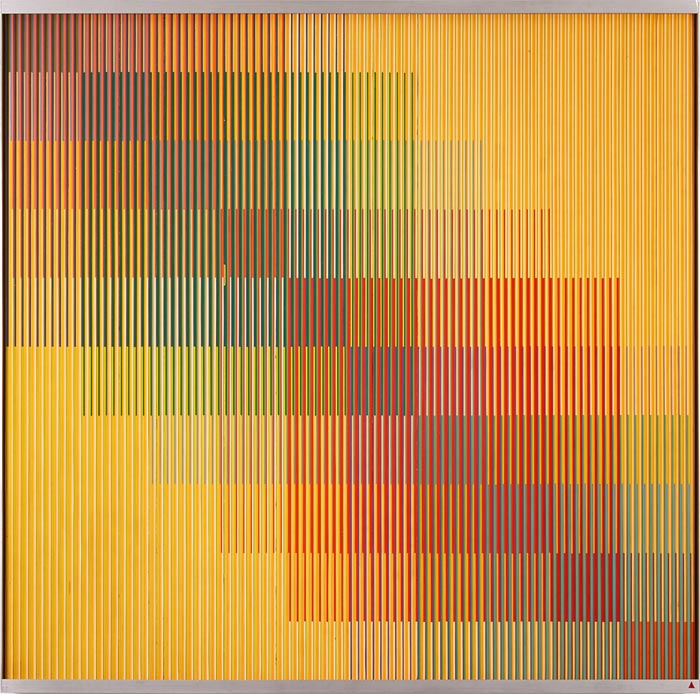 Cruz-Diez's work is inscribed in the context of the research of the New Trend, an artistic movement that has developed internationally since the end of the fifties. Programmed art, kinetic art, Op Art: these are some of the names assumed over time by the current, corresponding to as many expressive declinations. Despite their mutual differences, his exponents share a non-occasional interest in the phenomenologies of visual perception and gestaltic theories, that is, concerning the psychology of form; the common goal is the creation not of paintings, but of visual objects designed to develop a new critical awareness in those who observe them, so that they come to 'look at themselves'. It is thanks to operators like Cruz-Diez that the spectator changes his condition into that of a user; peculiar of the Venezuelan artist is to imagine him as an active subject who, moving in space, can grasp the different interactions between ambient light and the constituent elements of the work, of which he becomes the completion factor. Cruz-Diez's are, in his words, "iridescent structures" from which the plastic illusion of movement arises, but at the same time they are also the formal outcome of the artist's studies on irradiated color, its emotional values , its relationship with light and space. Present with his works in all the most important collective exhibitions of the New Trend - among which we remember The Responsive Eye, held in New York in 1965 - Cruz-Diez has in the Physichromie, represented here by a specimen of 1973, its core of most famous works.