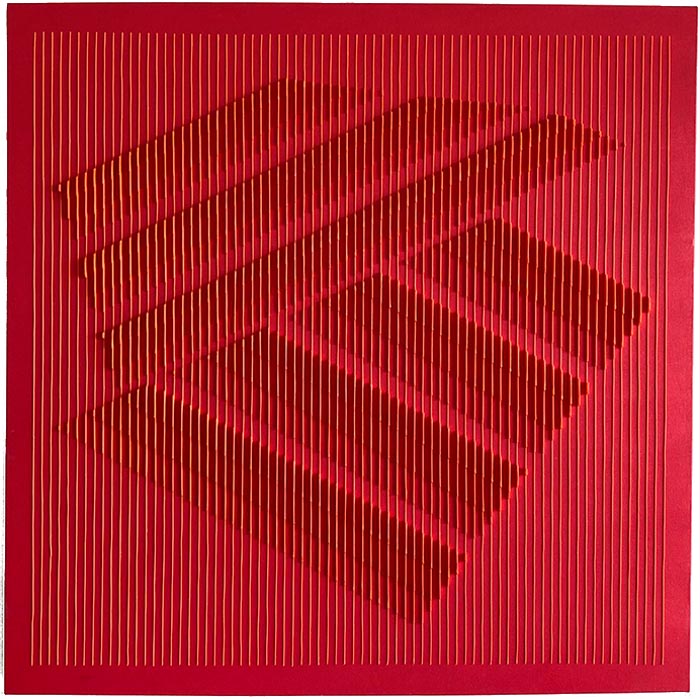 "Like any field of knowledge, I believe that even that of the psychology of perception should be considered as infinite." So stated in 2008 Manfredo Massironi, one of the key figures of programmed kinetic art. A trend that since its first manifestation, at the dawn of the sixties, intertwined a close relationship with scientific research relevant to the activity of 'seeing'. Perhaps, precisely this link of the current with science and its unlimited exploration explains its persistence over time and its renewal through new experiences. Among the most recent is that of Colombian Daniel Samper, an artist who amplifies the three-dimensional vocation of 'visual objects' designed to stimulate the perceptive faculties of the observer, and deepens their interaction with the luminous phenomenon. Samper creates his structures thanks to the reiteration of single plastic elements characterized by a marked projection with respect to the surface plane. Through their arrangement, their different chromatic qualities, their intervals, the artist determines the perceptual manifestation of elementary geometric shapes or configurations of his own invention, which appear to possess the consistency of shadow. Built on the relationship between two shades of red, the 'wall sculpture' presented here does not seem to imagine, as often happens in the artist's works, the viewer as a 'mobile' subject, able to grasp the illusory dynamism of the composition, but rather provide a precise observation point for it, from which to focus on its sought-after iconic essentiality.