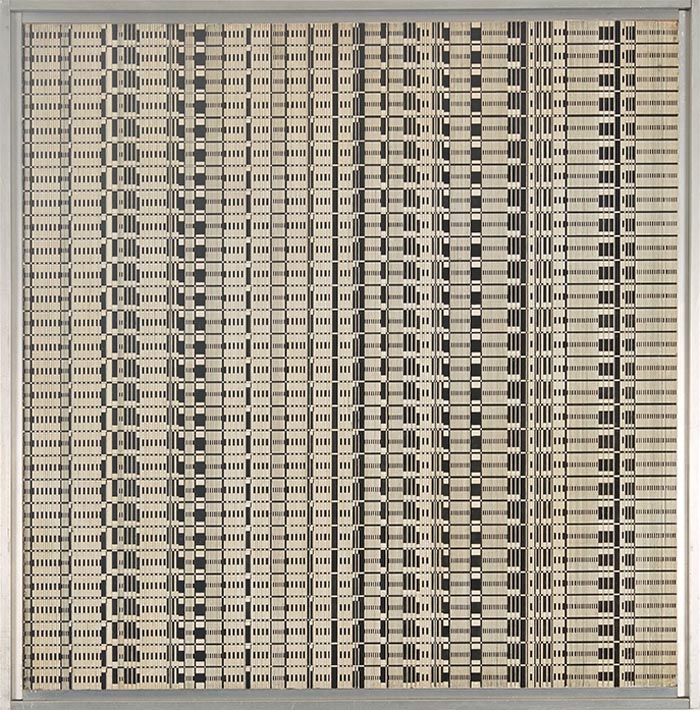 Lucia Di Luciano's artistic career can rightly be defined as exemplary. The use of this adjective - to be understood in the breadth of its meanings - is justified on the one hand by the integrity that has characterized her pictorial work over time, which has remained faithful to the original aniconic approach and rigorously rational premises. On the other hand, from the emblematic value that her creative story assumes with respect to the current to which it is attributable: that of the Programmed Art, whose history starts in the early sixties and is part of a wider international phenomenon called New Trend . The analysis of her work in fact returns a synoptic image not only of the expressive modalities of the current, but also of the cultural field within which her operators have produced their action. The artist's surfaces, completely saturated by the space of the image, reveal connections with Gestaltpsychology, show design analogies with the constructivist lesson, and underlie philosophical contiguity with structuralist thought. Crucial, as for many other artists similar to her, was the experimentation of shared creativity, an experience that she saw among the founders of various research groups. An exemplary character, this time to be understood in relation to his artistic production, also has the work presented here: a dense 'grid' of black and white shapes, crossed by rhythmic alternations and endowed with perceptive mobility. It testifies to the creation of a true metalanguage, aimed - in the words of Lea Vergine - "to broaden perception and the cognitive horizon".