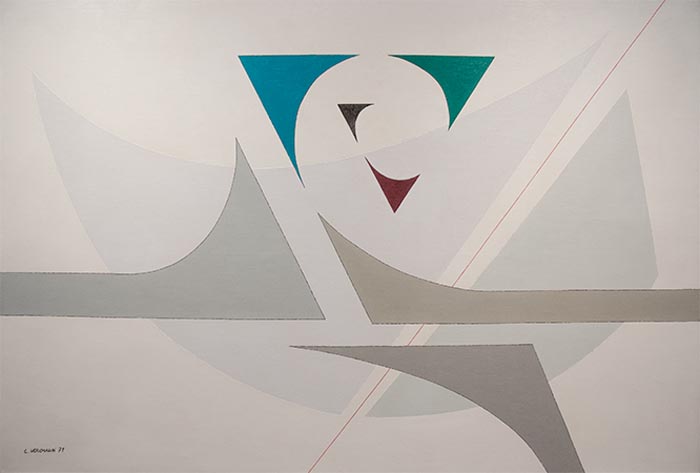 Italian abstractionism, although it has its prodromes in the futurist avant-garde, manifests itself as a 'current' only in the thirties of the twentieth century, thanks to a nucleus of artists operating in the Lombard area that finds a point of aggregation in the activity of Il Milione gallery in Milan. Having blossomed in a cultural climate marked by a return to the plastic values ​​of classicism, the work of Veronesi, Licini, Reggiani and others links Italian art to international non-figurative trends. Peculiar to Veronesi, proponent of an expression mainly based on the forms of plane geometry, is the centrality attributed to the rhythmic values ​​of the composition as well as to the 'musical' values ​​of color. In 1934, his first abstract works coexist with works by Josef Albers in the spaces of the Million, and his adhesion to the Abstraction-Création group is recorded. His creative thinking, which reveals a growing affinity with concretist research, soon focuses on the theme of variation: in 1936, the 14 variations of a pictorial theme saw the harmony of forms spring from precise mathematical relationships. Subsequently, the desire to give life to a painting in motion is realized in the making of six films, the film of which is literally hand painted by the artist. The cycle of works of an 'organic' and material nature, in the early sixties, represents a parenthesis in his research, which will see the geometric root re-emerge and will find new opportunities for experimentation in the applied arts. Attributable to Veronesi's maturity, the work of the Ekilibrio Foundation shows a compositional measure that is now free from any norm that is not of the artist's personal conception.