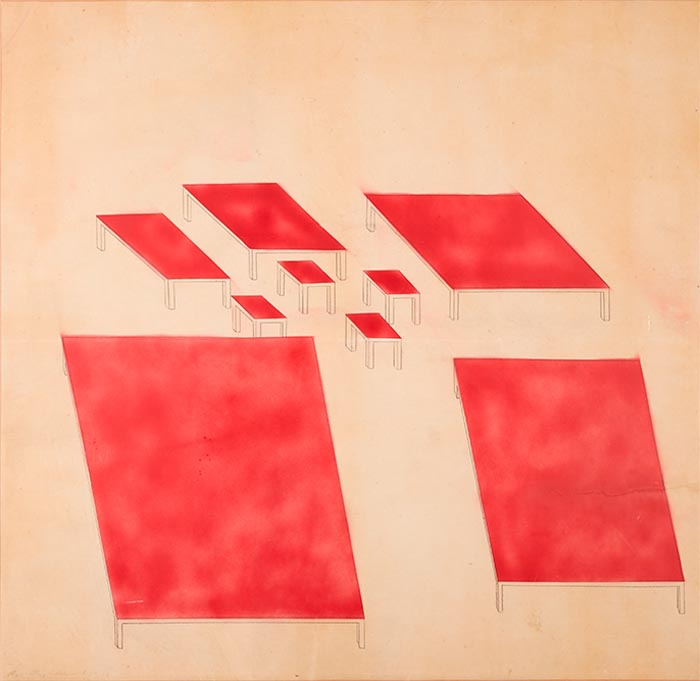 Merz's work aims to establish a correspondence between distant physical and cultural dimensions, when not opposite. His works stand as a moment of identification between the organic and inorganic spheres, between the elements of nature and the products of industry, between biological processes and artistic processuality. Merz appropriates materiality and representative substances of such contexts, emphasizing their implicit expressive energy. Neon tubes, wooden bundles, hay bales, pigments, metal elements, leather, shells represent the basis for assembly processes, or they concretize a design aimed at dominating the space with strong plastic presence. The propensity of his work to highlight structures - material as well as intellectuals - of a primary character, makes him one of the most emblematic figures of Arte Povera. Between the end of the sixties and the early seventies, the artist identifies in the shape of the igloo, in the famous mathematical sequence of Fibonacci, in the element of the table three conceptual keys to interpret and describe the world. The igloo is the archetype of the house, it refers to the cosmos and nomadic life; Fibonacci's numerical progression, represented through various graphic and performative modalities, summarizes the development process of some organisms and natural phenomena; the table is the place around which human beings gather, but also where the liturgy and creativity take shape. The work presented here leads back to performative actions in which the number of people invited to sit around the tables, as well as the spiral configuration identified by the arrangement of them, still recall the Fibonacci numerical series.