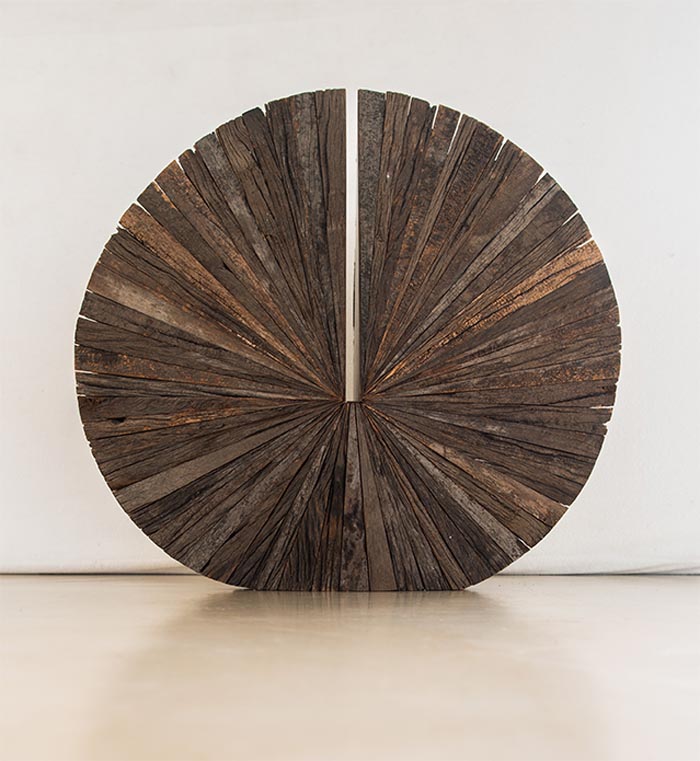 Ricardo Pascale
From the vulture III

Pascale's human and professional life offers surprising aspects. The sculptor, who represented Uruguay at the 48th edition of the Venice Biennale in 1999, is at the same time one of the most distinguished economists in his country. Pascale has repeatedly elaborated reflections concerning the possible affinities between such different fields, highlighting how both economic planning and the creation of a form envisage problems to be solved starting from a limited resource; and how, in addition to the administration of capital, the desire to express aesthetic harmony also has its tool in mathematics. In a recurring way, his works trace the relationships of the golden section or are based on the Fibonacci number sequence, which summarizes the development in nature of some organisms and phenomena. The relationship between man and nature 'resource' assumes centrality in his work, being signaled by the sculptor's predilection for wood. Pascale remodels and assembles various types of South American wood, expressively using their chromatic temperatures and their different responses to his modeling action. These are mostly materials already worn out by time and use, stained by lime or corroded by acids, whose energy is restored by the artist and aimed at transmitting a message of a poetic nature. If wood ideally transcends its own materiality, the shape transcends the naturalistic datum to which it refers. This is the case of Desde el Vulture III, a work inspired by an extinct volcano in Basilicata and its landscape, for the evocation of which the artist uses a formal archetype dear to him: that of the wheel.