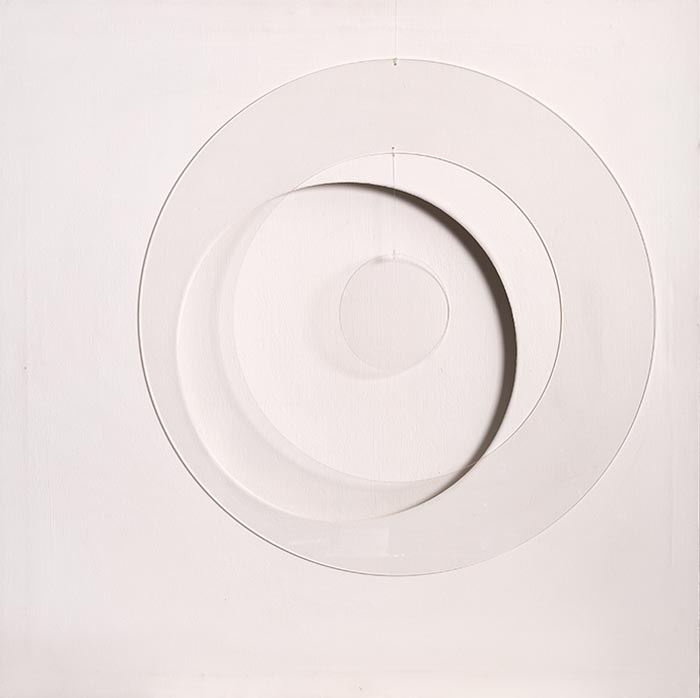 Sara Campesan's work develops along two ideal lines. One is traced by the artist's experimental attitude, regarding the materials chosen and their formal elaboration. The other, from the desire to free images from their conventional representative function. These intentions are announced in the pictorial works with which, starting from the early sixties, she Campesan begins to define her own expressive identity. In the Spaccature series, the image of Venetian walls finds a sort of objectification in the physical peculiarities of the surfaces: prepared with a mixture of plaster, sand and industrial glue, these are affected by subsequent break-ins and scratches. The abandonment of any referentiality with respect to the realistic data coincides for the artist with her approach, a few years later, to programmed and optical research, and with the transformation of her works into visual objects based on a scrupulous design. With them, Campesan sets out to investigate the phenomenologies related to movement, light, space. The frequent use of circular and spiral shapes, due to their symbolic opposition to stasis, expresses interest in the first of these concepts, which finds concreteness in the virtual or actual mobility of some components of her works. The use of materials with a particular reflective quality is instead instrumental to the manifestation of luminous phenomena, while the progressive volumetric enlargement of the objects will allow them an increasing spatial penetration. A sophisticated lightness, made of transparency and formal conciseness, marks the Circular Image, a work that assumes an exemplary character with respect to the artist's history.