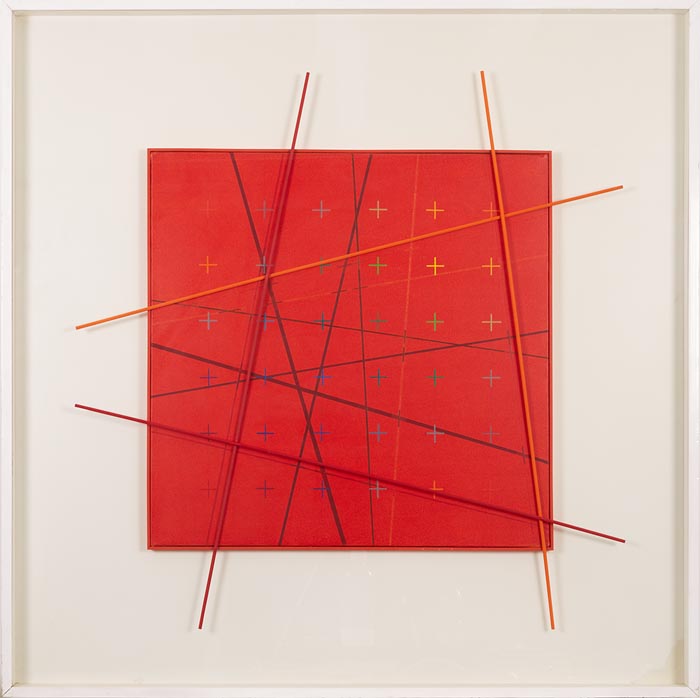 The 'analytical' line of Italian abstraction has among its protagonists Paolo Minoli, whose painting constitutes an ideal continuation of the research addresses referable to authors such as Radice, Veronesi, Dorazio, Nigro. Realizing a full coincidence between theoretical investigation and operational practice, the artist gave life for thirty years to an articulated reflection on the theme of color, marked by images of an aniconic and geometric order. Investigated both as a phenomenal entity and as a poetic territory, color has triggered in his works a dialogic relationship first with the notion of space, then with those of environment, structure and time, finally lending itself to giving pictorial form to the cadences of metrics, to frequencies of music. Speaking of the complexity of his work, Eugen Gomringer stated that, in his opinion, there is no other significant work that has managed to produce a poetic value of similar magnitude with constructive means. Owner from 1979 to 2004 of the special course in Chromatology at the Brera Academy of Fine Arts, Minoli also designed numerous monumental public sculptures, often representing a real challenge launched by the artist to the dimension of emptiness. However, the plastic vocation is also implicit in his pictorial production, as evidenced by the tangible three-dimensionality of Trasfigurato, a work included in the Ekancio Foundation collection; Linear interpenetrations, whose chromatic pulsation is the result of studies conducted by Minoli on problems concerning visual perception, is approached to it.